A few months (possibly a year) ago, our friend K. introduced us to a wonderful concept: Workaway. Many people like to travel the world (or Europe, or just Spain), and travelling is an expensive hobby; however there are several websites where travellers can choose between a myriad of places to stay -each with their own unique culture, cuisine and surroundings- and stay there without spending a cent. There’s a catch, of course: there is a price to pay. But the currency is not money… it’s work.

This summer, we took a leap: we made a profile on workaway.info, and then we waited. We didn’t wait long; we soon got e-mails from people interested in coming to stay at our finca (even though camping is the only option atm) in exchange for hard labour on the farm. The first elected few arrived at Mas del Encanto in the middle of August; M. and S. from New Zealand took a leap as well. 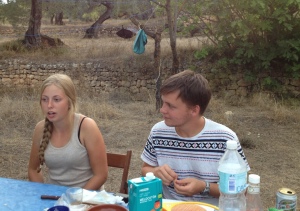 The experience exceeded all expectations; M&S turned out to be friendly and fun, easy to talk to, and quick to pick up new tricks. Ok, after sleeping in a tent for 2 weeks I guess they were probably looking forward to a real bed (although you can do worse than a nice inflatable mattress), and since the fridge and food supply is in the maset (which is basically our bedroom as well) there was not much room for privacy, and maybe eating marinated zucchini slices every single day might have made everybody feel like a zucchini (a tiny bit), but on the other hand my vegetable patch looks like a dedicated gardener has been working on it for months (after they went through it, I could actually find more zucchini! And melons, pumpkins and corn as well). S. dedicated herself to cutting olive sprouts, M. dug in the water pipes to the bathroom, and there was even some stone gathering and shed building.

But all that working was just the mornings; the afternoons were spent swimming, relaxing in the shade, hiking, reading, picking fruit, and relaxing a bit more… at night, there were even a few attempts to going out, and many beers, and conversations about travelling and politics and the world in general. But mostly there was eating zucchini. And one afternoon tasting melons…

We left M&S at Tortosa station, on their way to Valencia and the Tomatina. And plans to walk El Camino after that. And Italy, and Denmark, and more exotic places… We wished them all the luck, and are hoping they’ll come back to see the finca in a few years – when we’ve planted even more, the fruit trees have grown, and we’re kind of settled…

In a few days now, we’ll be welcoming F. (kind of Canadian) and A. (basically German) who will try to teach us all about cooking vegetarian with local and seasonal produce (a challenge in a region where the main local produce is meat), and we’re hoping they’ll help us plant some new fruit trees and build a chicken coop. Or maybe prepare the veggie garden for fall & winter, build stairs between terraces, dig swales? There are so many plans, so little time… but hopefully many more “workaways” who’ll come and broaden our world, while helping us to lessen the pile of work (and eating our zucchini, of course).